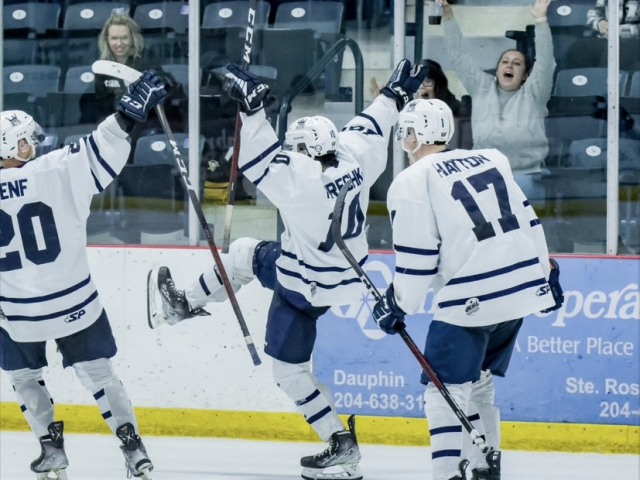 Garrett Hrechka scored the game winning goal in game six of last year’s MJHL final against the Steinbach Pistons. On Saturday night in Dauphin, he ended the game once again.

In a thrilling game against the Swan Valley Stampeders, Hrechka scored the game-winner for Dauphin in overtime as the Kings earned a 3-2 win.

Riley Borody scored first to give the Kings a 1-0 lead in the first but the Stampeders scored two straight to take a 2-1 lead in the third. That’s when Mason Smith stepped up. He took a beautiful pass from Blake Boudreau and potted it to the back of the net for his first as a King.

That set the stage for Hrechka. Nicholas Hatton had a lane down the left side of the ice and he skated it across the blue line, fed Hrechka and the 20-year-old from Dauphin did the rest to seal the game.

Keaton Woolsey also made an incredible save on Collin Jennings in overtime.

With the win, Dauphin snaps their three-game losing streak and they are now 2-2-1 on the season. Swan Valley; meanwhile, are now 2-2-1.

Dauphin is back in action Tuesday when they play the Neepawa Titans at the Yellowhead Centre, their next home game is next Friday when the Winnipeg Blues are in town.