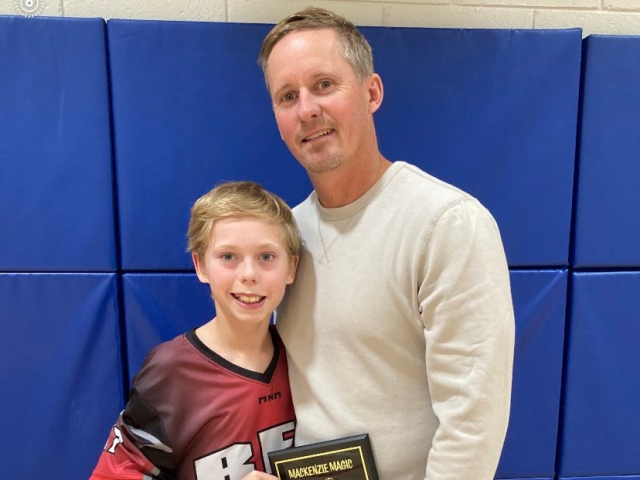 Sitting back on a cart and driving around while watching Jarrett Newton strike the golf ball in itself is enjoyable. Then you drive to the green and watch him drain his fifth birdie of the round. After all, Newton is an 11-time champion of the Roblin men's open. While he loves to play golf among many other sports, it's volleyball that is his true passion.

He's been involved in the game for more than two decades and during that time has had the opportunity to join Club West U16 as a coach at multiple Western Canadian championships. The team enjoyed some success at that event including when they finished with a silver medal after a loss against Fraser Valley.

Where did Jarrett's passion for volleyball come from you ask? His dad. He coached the high school program and Newton spent hundreds of hours at the gym watching practices and tournaments over the years.

So while Jarrett has been able to check off many of the boxes on his volleyball journey, coaching his son wasn't one, until this year. As Ryder Newton wraps up his elementary journey ahead of heading to high school, he is playing one more season with the Roblin Elementary School grade 8 boys' volleyball team and his dad is the coach alongside Matt McCorrister.

Jarrett has been waiting for years to coach his son on the volleyball court and his dream has finally become a reality.

"It's awesome. I've coached Ryder in other sports but volleyball is my true passion," said Newton. "It's the sport I love the most so to be able to watch him and his buddies get on the court and do things that they had no idea they were capable of doing, it's really special."

This year's team is also having some great success on the court. They opened the season by winning a tournament hosted in Gilbert Plains and then they had a perfect weekend in Dauphin as they were crowned champions of the tournament hosted at Mackenzie Middle School. They won all 10 sets and Tosh Johnson was named the tournament's most valuable player.

The team plays another exhibition game later this week and Newton says they are hoping to gain entry in the provincial championships hosted by Volleyball Manitoba.

"There is a lot that these kids don't know about volleyball yet and I'm looking forward to teaching them as much as I can," said Newton. "I'm excited to see this group grow together, there are some special athletes."