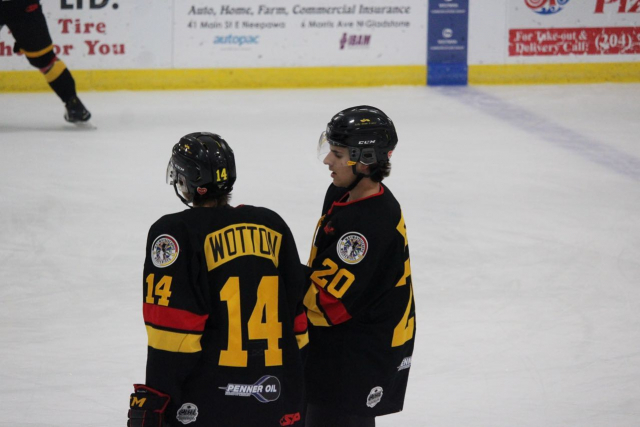 Aiden Ziprick doesn't even turn 17 until the beginning of December and he's already in his second year with the Waywayseecappo Wolverines. Starting his rookie year last year as a 15-year-old, Ziprick is loving being a Wolverine.

Growing up in Russell, he spent many weekend nights at the Arena Complex watching Waywayseecappo in game action and now he's living out his dream.

"It's awesome, being able to live at home and play junior is something pretty much all kids dream about," said Ziprick. "We have a great group of guys and we're all pretty close in the room which helps us on the ice."

After a 12-point campaign last year, Aiden is well on his way to posting a new career-high in points. After 15 games, the hometown favourite has scored three goals while adding four assists. He also had a goal on Saturday night in the team's win over the Kings.

"The points coming is a nice little confidence boost for me," said Ziprick. "I have a year under my belt after last year so I feel better about where my game is at and I'm getting those opportunities to produce."

Waywayseecappo is fifth in the West Division after 15 games but they're only one point out of a playoff spot and five points back of second place which is currently occupied by Dauphin. The bulk of Waywayseecappo's success has come on home ice with just one regulation loss at the Arena Complex, compiling a record of 4-1-2. The team is back in action this weekend as they play a home-and-home with the Winnipeg Freeze who has struggled in the MGEU East Division.

It's not often that a 16-year-old is given the opportunity to play such a big role on their team but that is exactly the case for Aiden. He has been getting regular shifts on the power play and penalty kill which shows that Taylor Harnett has plenty of faith in the young man from Russell.

"Playing a lot of minutes and getting some special teams time is pretty great," said Ziprick. "I've worked really hard and it feels great to know that the coaches can put trust in me. I'm doing everything I can to make the most of all the time I get."

What is Aiden's favourite moment as a Wolverine you ask? You have to go all the way back to the second game of the season last year. That's when the Wolverines played their home opener against the Oil Capitals as Ziprick made his MJHL regular season debut. The team won the game 5-1.

"I just had that feeling of wow, I'm actually here," ended Ziprick. "To be able to get that chance to play with my hometown junior team for the first time, it was a proud moment for me and my family."