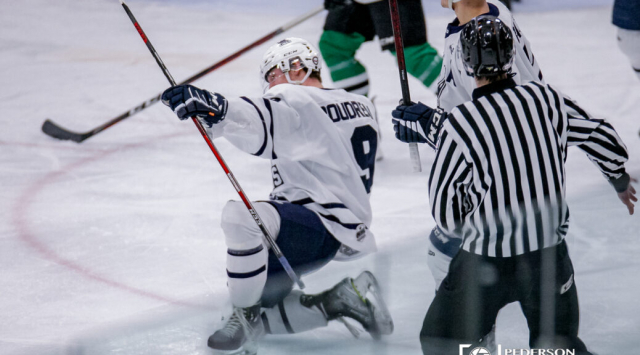 The Dauphin Kings opened up a big lead, Marko Belak put together a masterful performance and the team has their 14th win of the season.

Playing their first game of the season against the Portage Terriers, the Kings led 4-1 in the third period, and they ended up holding on for a 4-3 win.

Belak finished the game with 41 saves. The Kings came out on fire offensively as they scored three goals in the first 9:44 of the game. This included a highlight reel goal from Blake Boudreau in which he undressed a Terrier defender and Bailey Monteith in net as he scored his eighth of the season.

Mathew Gough opened up the scoring and Myles Yearwood scored his fourth to give Dauphin a 3-0 lead. Kian Calder — the brother of Logan Calder who helped Dauphin win the Turnbull Cup last year — would score his fifth to give Portage some life, but they still trailed by a pair of goals after 20 minutes.

Dauphin scored the lone goal in the second as Jayden Harris finished off a 2-on-1 with his seventh of the season, just 93 seconds into the frame as Dauphin led 4-1 after 40 minutes.

Hayden Lacquette scored in his return to Dauphin for Portage in the third and Noah Wagner also scored; however, it wasn’t enough for the Terriers as they fell short.

Dauphin has now beaten all of the top teams in the East Division, the Steinbach Pistons, Winkler Flyers, and now the Portage Terriers.

With the win, the team improves to 14-8-2 and they’re in solo second in the West Division. Dauphin is also just two points back of OCN who is in first in the division.

Next up for the Kings is a home-and-home this weekend with the Neepawa Titans. Friday’s game is in Neepawa before the clubs return to Dauphin on Saturday.